The fourth and final old bird race of the 2021 season for the National Flying Club was held from Guernsey on the 17th July. A total of 5419 birds were entered by 514 members which were taken to the liberation site in the very capable hands of Dom McCoy and his team. He said the trip to Guernsey went like clockwork and after their Covid checks they were allowed to leave the port and were met by their Police Escort to the race point at Pembroke beach. They let the birds settle down before offering them more food and water. He was up and waiting for the sun to rise at 4am on the Saturday morning when he received the first call of the day from our Race Adviser Steve White who said the channel was looking good for an early liberation. At 6am he began to cut the strings with the local press photographers positioning themselves for the liberation shot and a large crowd gathered around the tape barrier he had set up for the occasion. A few last calls were made to check the conditions then at 7:30am the birds were liberated into a light North East wind and cleared very quickly.

After missing out on the first two races from Sennen Cove it was pleasing to see the conditions were more favourable for the west country and for an hour or so previous NFC Open winners Mike Underhill and Rob Prettejohn, topped the leader board in Plymouth. It was a great pigeon which finished up being second open but far to the west, another 65 miles further on, Gary Jacobs was sitting in the sunshine, with his back leaning against the loft looking out to seas towards Guernsey. His birds would normally come around the bay along the coastline but as he was staring towards the Lizard Peninsula, he saw a dot of a pigeon coming straight towards him directly on line for Guernsey, a distance of 142 miles across the sea, which it had flown over the whole way. 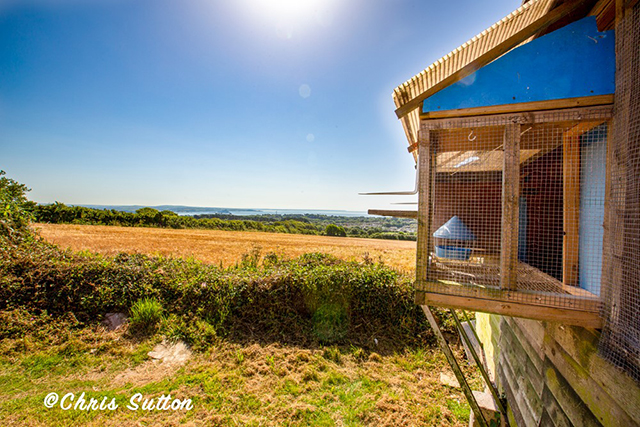 He stood up to watch where it was going but it continued to draw closer and it was indeed one of his birds, a roundabout cock which had spent the whole night with his hen before going to the race two days earlier. He raced right to the loft and trapped so quickly Gary immediately realised he had a good bird. 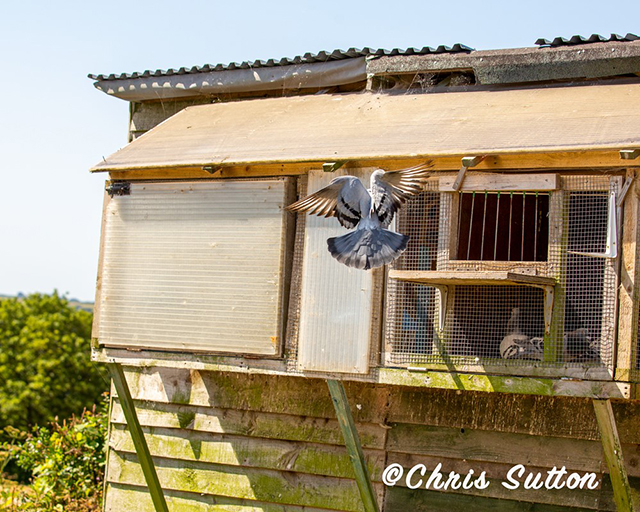 Just at that time his friend, Justin Rogers arrived to watch the birds come home and he could tell by the colour of Gary’s face that something special had happened. “He was in bits” said Justin “and he was finding it difficult to write the details down his hands were shaking so much” 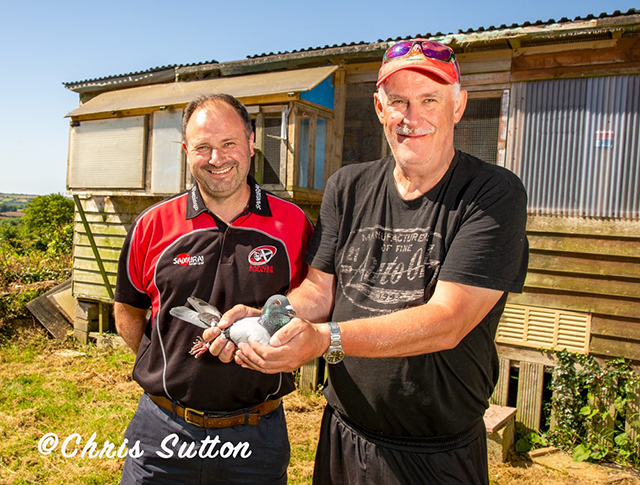 It was a special moment for the two friends, because Justin had bred the bird for Gary as three years ago to the day of this race, Gary was in hospital having a triple heart by-pass, which basically knocked him sideways for quite some time. Then to make things worse, in 2019, Circo virus sickness hit Gary’s loft and completely wiped him out of all pigeons. Consequently in 2020, Justin decided to breed Gary 25 youngsters to get him back up and running which were then lightly raced as youngsters. 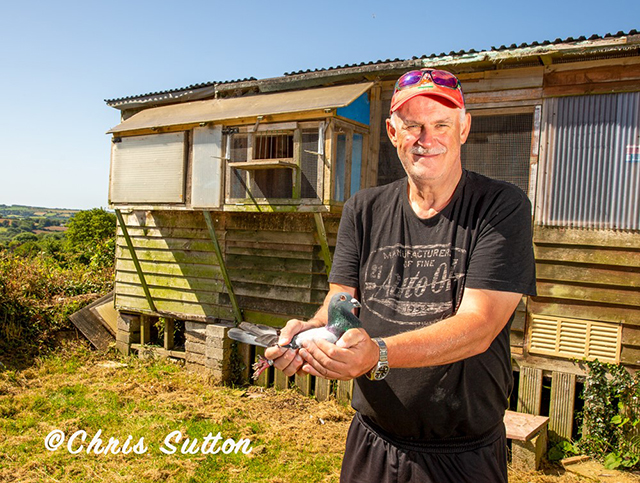 He followed this up by speaking with Gary at the beginning of the 2021 season and told him that if he wanted to be completive, he would have to move away from his old school methods, get these birds on a roundabout system and a new feeding regime. Gary took his advice which he has religiously applied, as indicated by his performances in the Cornish Combine this year. Obviously, the birds are highly motivated and with such motivation his bird has made good use of the favourable conditions and flown directly to his waiting hen.

Justin said that after a successful stint of racing, in 2018 he decided to take a break due to work commitments restricting his time with the birds. So, at Bosliven Lofts they decided to continue to sell some pigeons and recoup on the investments made when purchasing direct Leo Heremans and some of the best Gabby Vandenbeele bloodline available, which they acquired from top lofts such as G W P Macaloney and Mark Evans from M & D Evans direct. Determined to purchase as close to the tree as possible, they also decided to go to Eijerkamp to buy direct children of Leo Heremans pigeons and obtained multiple direct children of “Rossi”, “Jackpot”, “Den Euro”, “New Olympiade”, “Olympic Leo” and “Olympic Hanns” plus some direct from main breeders “Wild Wind”, “Super Heremans”, “Man O’Chester” and “Better Than Bolt” which were purchased from Premier Stud.

These have proven to be a great success as in the same race, their partner loft of Cottrell, Richmond & Rogers, which is run by Tony Cottrell in Wimborne, Dorset, clocked another Bosliven Lofts Heremans Ceuster which was 2nd Section B, 21st Open (provisional), carrying the lines of a daughter of “Chieftan” and “Blue Thunder”, bred by Ogilvie Lofts in Sterling, crossed on to another Bosliven Lofts inbred “Rossi”. This pigeon was also 15th Section B, 27th Open in the BBC from Wadebridge, when the Bosliven Ceusters also took 13th & 14th Section B & 25th & 26th Open.

He went on to say that him being pleased for Gary is an understatement, he is totally made up for him. For his shear dedication and commitment to the cause on winning the National Flying Club Guernsey 2. Gary is Chairman of the Cornish Combine and assistant Secretary of his local club, so is one of the workers in the sport and together they would like to congratulate the other Section winners and say a big thank you to the conveyors in doing a great job under very hot circumstances and wish everybody the very best of luck with the young bird races. 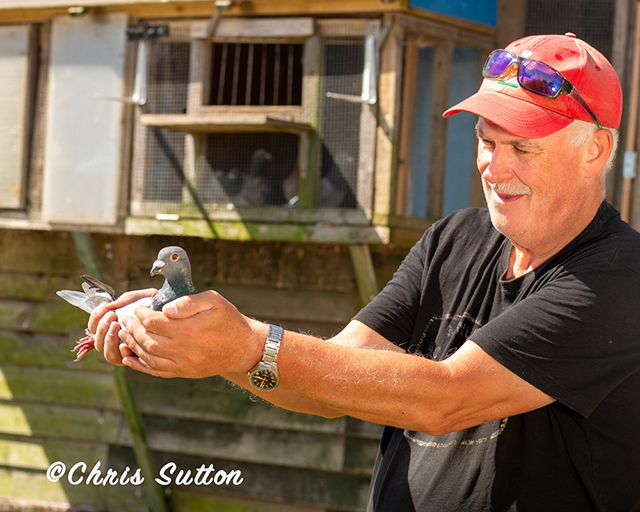 Those NFC members in Section Q are a real testament to National racing, as in most races they have to watch their birds coming back down the coastline, which adds on time they cannot afford, but they do not give up or quibble, they just wait their turn and such patience has been well rewarded this time from Guernsey with seven birds from six lofts in section Q showing in the top fifty of the provisional open result. Very well done to all of you and a big thank you for your Cornish hospitality shown to me and to our convoying team when they were at Sennen Cove, I left for home with two of the biggest Pasties I have ever seen, they really were the size of half a dustbin lid each.