The third race of the season for the National Flying Club was held from Guernsey on the 18th of June and the convoy of 4311 birds, entered by 437 members got away at 7:30am into a broken sky with a 12 mph North East wind, with heavy showers forecast to develop in the early afternoon across the middle of the country, from South Wales to East Anglia. With the very hot temperatures experienced on the Friday, the cold air coming down from the north would ensure fresher racing conditions but with the added risk of rain showers where the two fronts would meet, which transpired to become much more prolonged for some. Liberations in such circumstances is not an easy decision to make and I thank the Convoying team and Race Adviser for doing a job most would never like to take on.

Albeit somewhat more difficult for the northern fanciers due to the rain, it is great to see seven section winners in the top twenty of the provisional result. The birds have really got their individual lines, which would follow considering the number of times they have been to Guernsey this season and are putting in some top performances especially in the northerly winds.

First open was the Cornish loft of Willy Hollow in Hythe who timed his little blue hen “Champion Heather” to record a velocity of 1221ypm and it was very pleasing to see another Cornish fancier get the top honours, with section Q now having won 1st open NFC for the second time in two seasons. Sometimes the Cornish fanciers have to play second fiddle with the prevailing westerly winds against them but given a sniff of a chance “Champion Heather” had taken a direct line over 100 miles of sea from Guernsey, flying alone with little or no assistance. 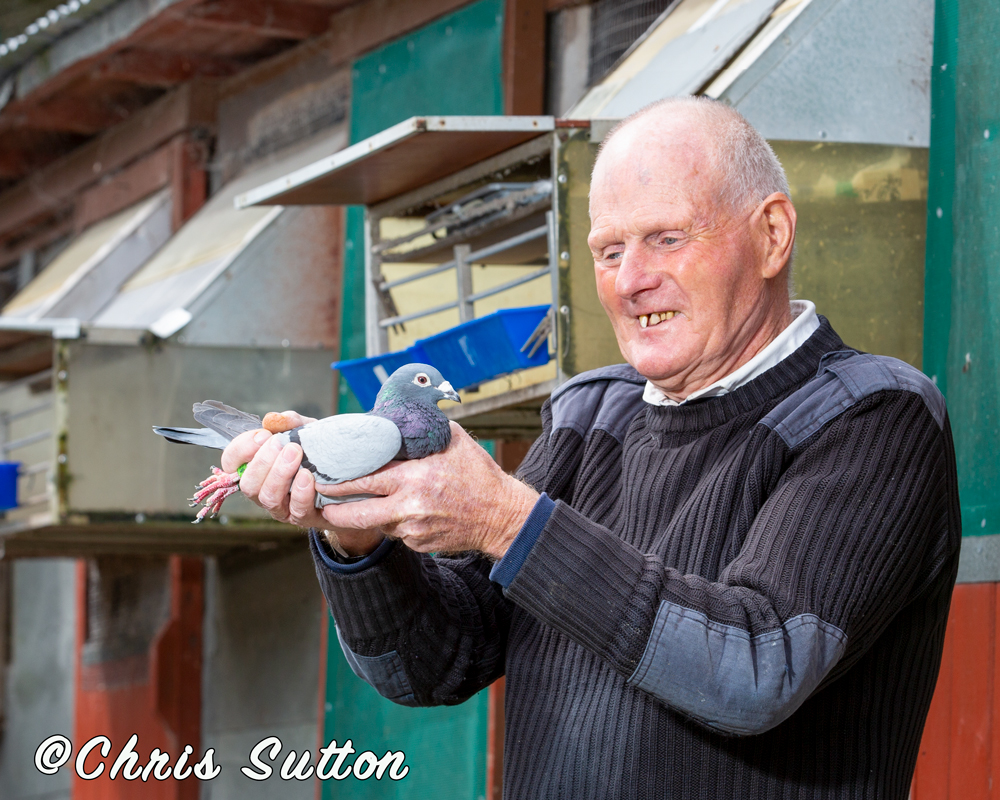 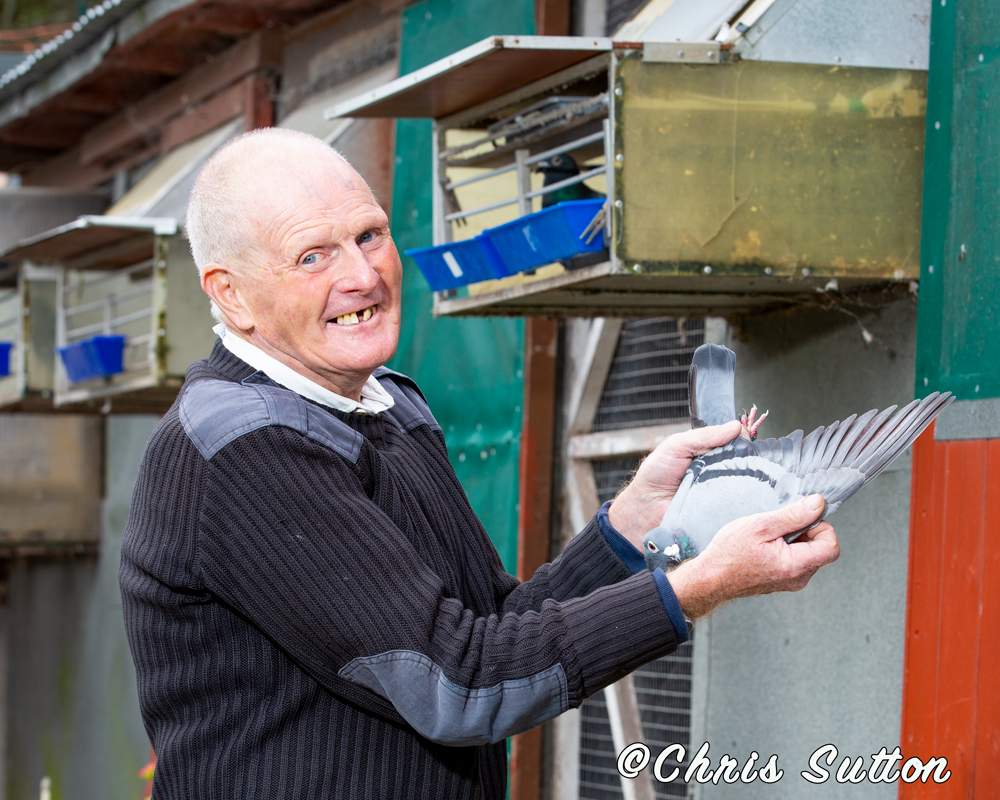 Pigeons came back into Willie’s life once again via his son some 30 years ago, after having them as a boy himself in the 1950’s. As is often the case after a few seasons, birds of a different kind took the sons interests away from the pigeons and Willie continued with them from then on. The garden of their 200 year old house on the north coast of Cornwall near St Ives is moderately long and very narrow, which meant that his wife Heather had to give up most if not all of it to the lofts once they arrived, so it is a gesture of compensation to have National winning hen named after her in appreciation of her many years of sacrifice. “It is a dream come true” said Willie “and one I never thought could happen” and he very nearly did not send her as he though she had had enough of the channel for this season, but his brother in law, John Hosking convinced him she was right for this NFC race. 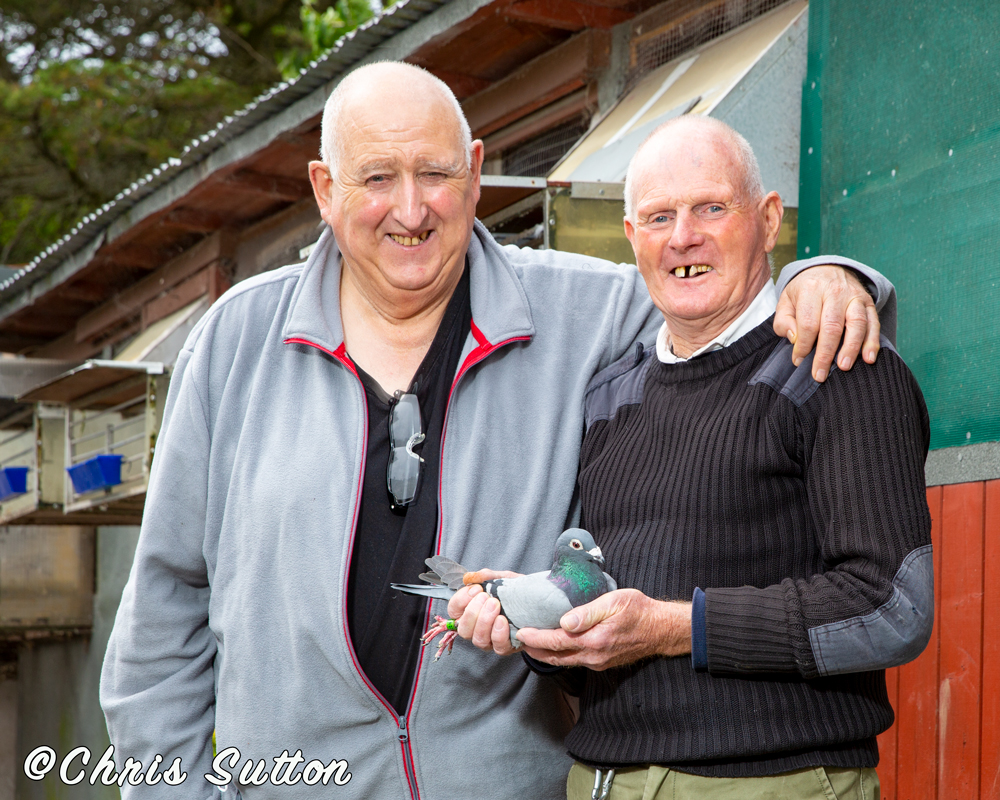 Being raced on the roundabout system, the four year old hen would be having her third channel race from Guernsey so she was left with her cock for a few hours as extra motivation, yet when she came, the house roof was her first perch for a few very tense minutes which is often a sign of nervousness after flying alone with Percy ever present in the sky. She was fed on Top Flight Supreme Widowhood mixture and all birds are given as much as they need. 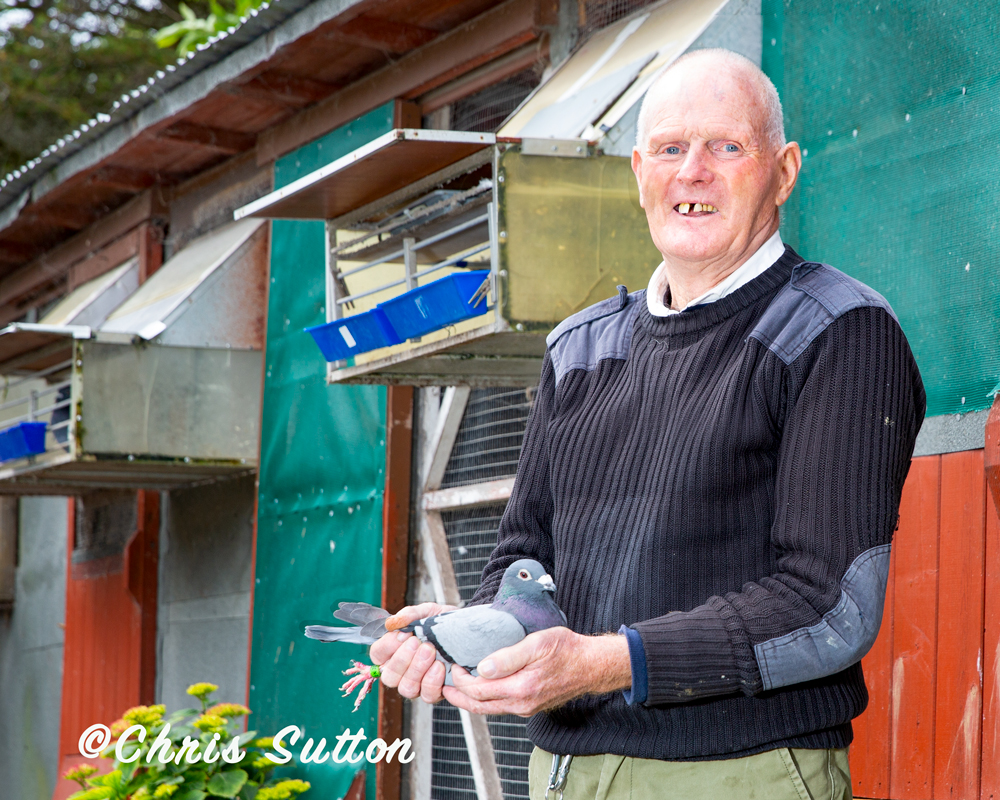 She was bred from birds owned by Malcolm Taylor of New Biggin in Northumberland out of his finest Hereman Ceusters which have proved to be very successful for Willie, coming out on top when tested in his own loft, against other families he has owned. He races his birds in the 15 member strong P2 Premier Club and uses the club races to get his birds fit. Training is no longer advisable in Cornwall due to the prevalence of the Peregrine Falcons but when just racing in the club he has not lost as many birds. For many years he has been taking the members birds to the NFC marking station and just 10 years ago he would take 34 members birds each race, sadly this has diminished somewhat, as has the whole sport. He enjoys the banter at the club and thanks all those members who helped him to celebrate his biggest thrill in pigeon racing as well as all the NFC Officials who volunteer to make the national races happen, which is often a thankless task, but most appreciated by the grass roots of the fancy. He would also like to thank all the many fanciers with their calls of congratulations and reiterates win or lose, he just enjoys seeing his birds come home safely each weekend and winning the NFC is a dream come true. 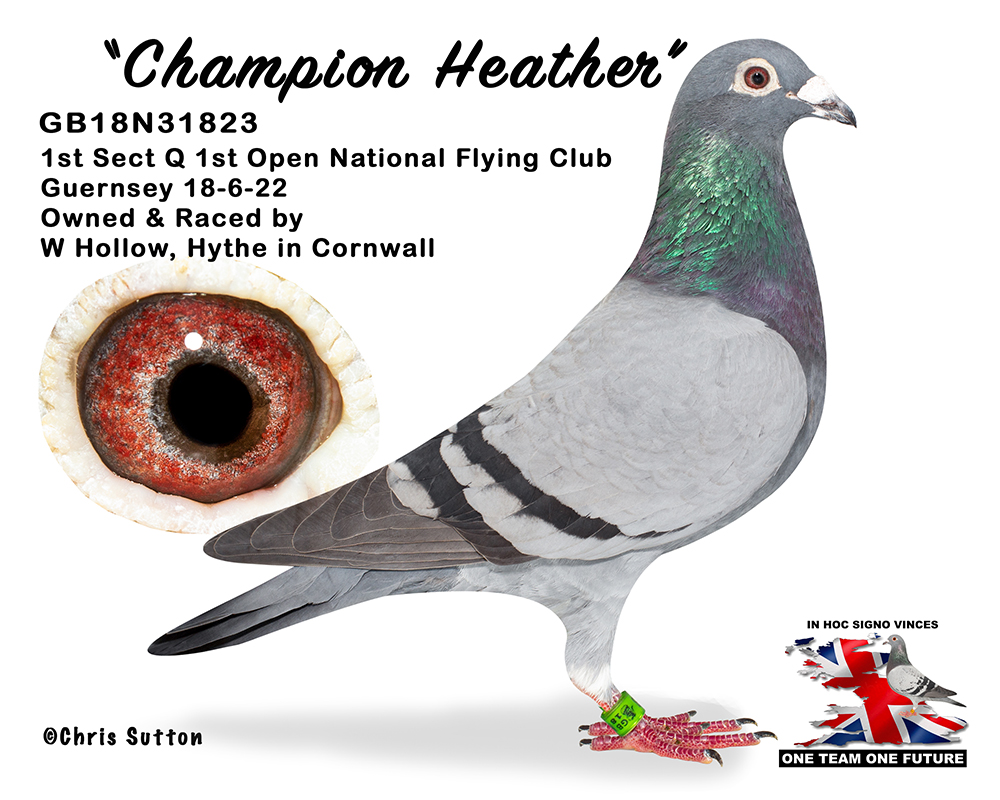 On now to the issue with the marking stations under the current DEFRA requirements for channel racing. The Committee would like to assure the members that they have not closed down the marking stations not being used for the joint race to be held from St Philbert on the 2nd of July, they are merely suspended whilst we go through the learning process. The main issue is that we are required to arrive at the final marking station before boarding the ferry no later than 4pm to allow enough time for the Official Vet to get the required documents stamped and approved before the Customs office closes. It is also imperative that we document every pigeon correctly without any mistakes as they will be checked at the holding station in France before being allowed to continue to the race point, and although our marking procedures are very stringent due to race security rules, we will have to check each members documents before allowing access to the marking tables. You are reminded that you will require your Part B Form filled in and signed for the race, your Vaccination Certificate for every bird in your loft, proof of your Vet Registration Number, your CPH Number Document which is emailed to you from the Rural Payments Agency and complete the racing pigeon establishment declaration.

This may seem a daunting task just to race a few birds but once you have been issued a CPH number for your establishment, all you need to do is download, complete and sign the racing pigeon establishment operator’s declaration form. This is to ensure you agree that your establishment meets, and will continue to comply with, the requirements set out in the declaration. You will need to keep a signed copy of the declaration as you may be asked to provide a copy to APHA and the OV as part of an export Health certificate application at the marking station. Your signed operator declaration is valid for 12 months from the date of signature, so once it is done at the beginning of the season, you just need to put it all into a folder and take it to the marking station with your birds.

This situation will settle down once we have held one or two races and I hope this explains the temporary suspension of some marking stations which we will open as soon as an acceptable and workable procedure is developed through the experience of this season’s races.

An important announcement for the St Philbert race on the 2nd of July is that if any member receives their CPH Number after the 26th of June which is the pre booking date of entry, their birds will be accepted up to the 29th of June if you contact the Secretary Sid Barkel with proof of late receipt.

Finally, please remember to send me details of your birds’ achievements if you are in the top five of your section on the provisional result within 7 days of the race.