agreed with his wife that he would not erect a pigeon loft there. He managed to house his birds at a location nearby location as a temporary option but sent his stock pigeons, with bloodlines mainly from Brian Murray in Cheshire, to his cousin David Beasley. 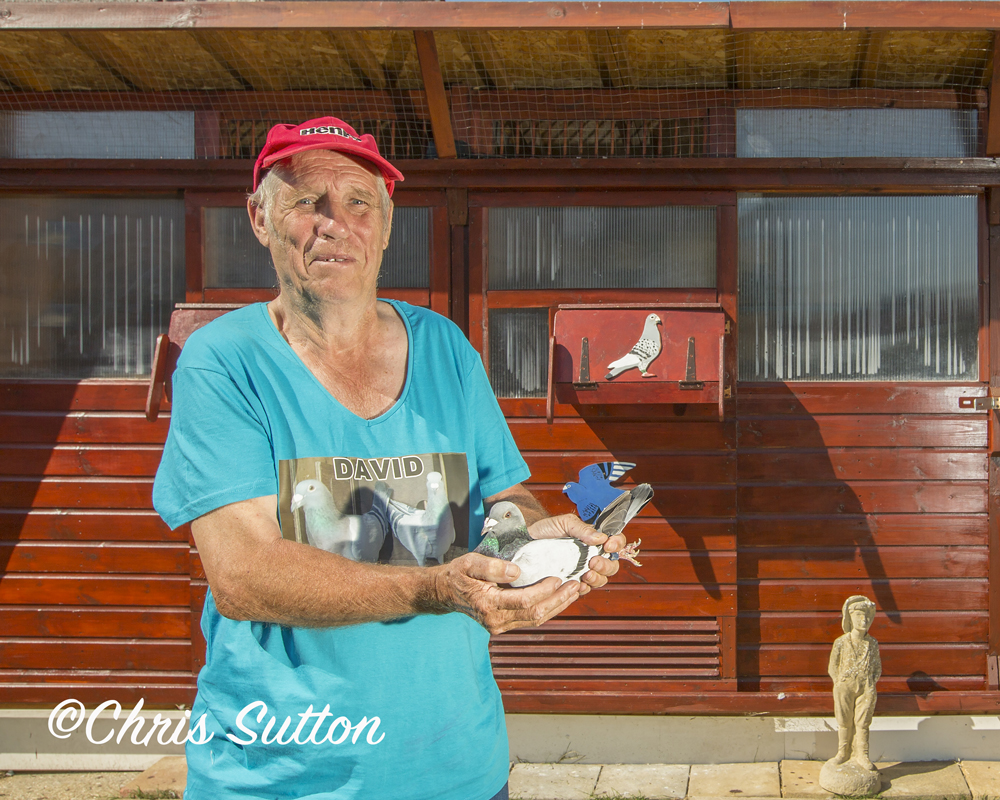 After a while he began to miss the birds, it was difficult to keep to the agreement with his wife because he had kept pigeons all his life, so a base was constructed followed by a brand new eighteen-foot loft just 12 months ago. David Beasley bred him some youngsters early in the season from the Brian Murray stock, in fact so early they struggled to get the rings on as soon as they were released, and they shock hands that they would share the young birds 50/50.

So, in January this year his first season to a new location was underway with many happy hours spent in and around the birds and although they are located right next to a busy bus route they are very tame. David likes nothing more than to sit in the garden on a summers day with the birds pecking around his feet watching for those little tell tales signs. He only ever sends four birds to a National race, so watching them closely to pick out his team is invaluable, and on this occasion, he had noticed a young Koopman cock bred via the Brian Murray bloodlines beginning to drive a hen. After a day or two they were tucked up together in a nest box which bought his ticket to the National Flying Club Coutances race with a young hen on his mind. 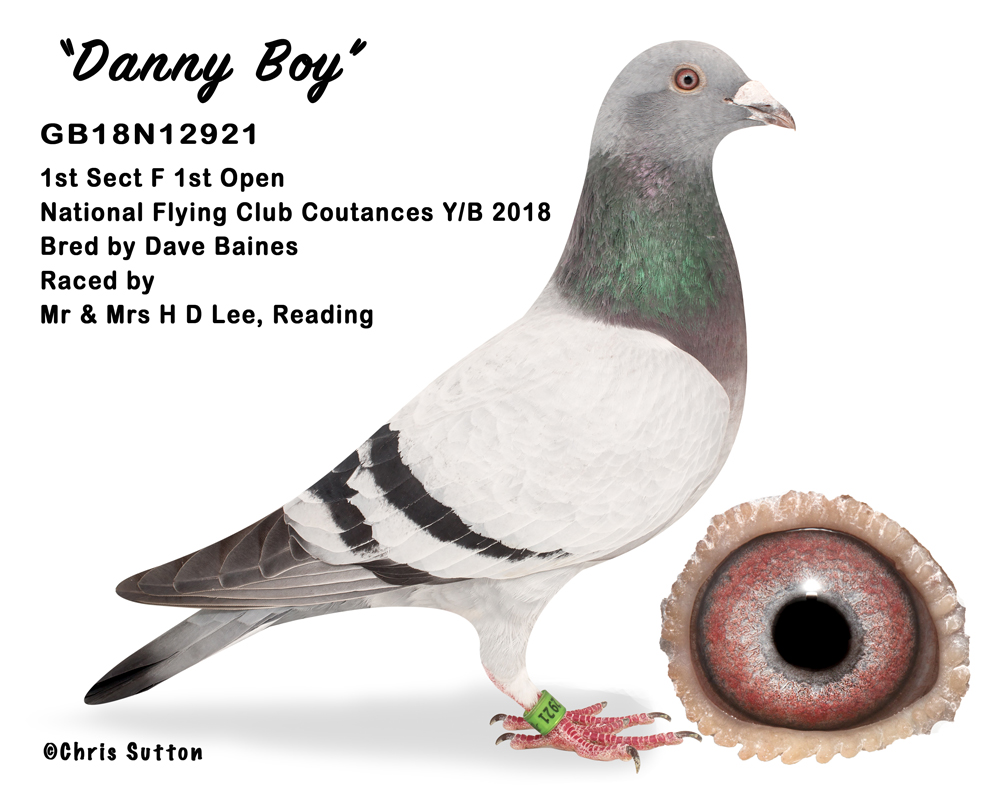 Very early on the morning of the race he had gone to a local car boot sale with his friend and as they were returning towards his house he spotted a small dot high in the sky and wondered if it was a pigeon for him, but thought it was too early to be a National pigeon. It dropped like a stone right on to his loft and even then, he considered it to be one that had returned late from the week before and went straight into home to speak with his wife before checking. Luckily, he had left the loft set up ready because when he peered through the bob wires, he could see the blue cock sitting in his box with the hen jumping all over him. He checked the clock and verified the time with the club secretary and to his surprise he went to the top of the leader board and stayed there, although he fully expected to be beaten by flyers further north as it was such a good racing day for all of the country.

He feeds his birds on Country Wide mixture with a lot of barley added and, in the wintertime he feeds just beans and barley although he does mix up his own Matrix style mixture with vitamins and minerals as an additive to the main feed during racing.

Next year he will begin with twelve pairs of yearlings and David said he really appreciates the assistance given by John Roleston, Secretary of the local pigeon club, who helps him tremendously by training his pigeons and taking him to the marking stations for the NFC and BICC, plus Diane Abery also helps out with the marking for the Central Southern Classic.

The Coutance Old Hens race was won by Roger Sutton in Congleton, a quiet and unassuming man with that special quality of stockmanship passed down through generations of farmers. 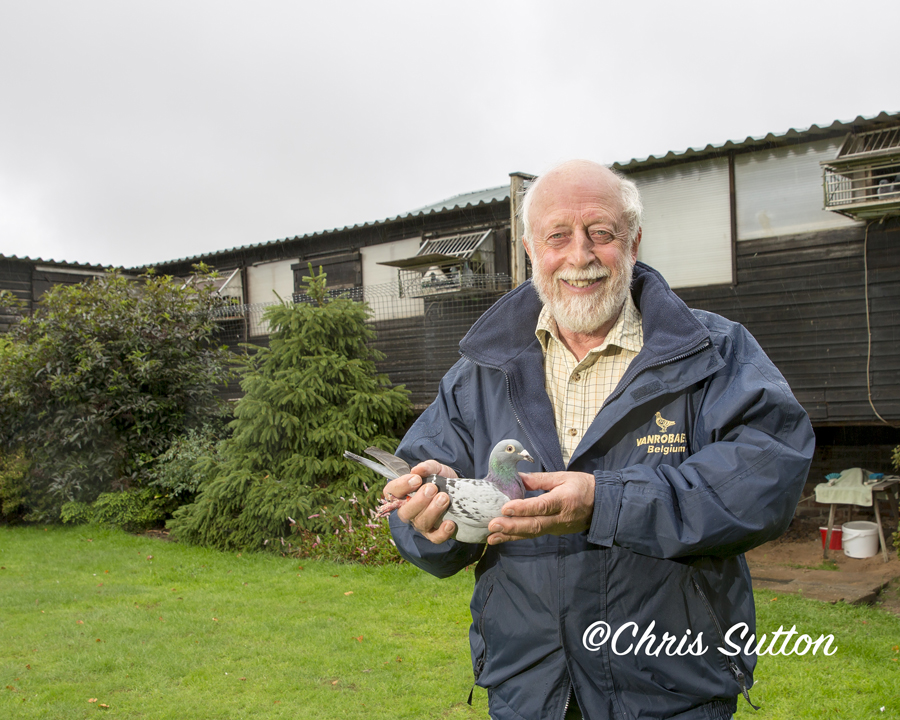 He has been a top National fancier for many years, being well respected within the fancy and a long-standing member of the coveted Lancashire Social Circle. He lives and works a farm in Astbury which was first bought by his grandfather in 1920 and kept pigeons there from a very early age when stray pigeons would frequent the open barns which attracted Rogers interests as a young boy and initiated the beginning of his racing career.

Since he took over the farm from his father he has developed it into a many faceted business and with the help of his two sons he now runs a Van Robaeys pigeon corn distribution with a Racing Pigeon supply shop as well as the Arable farm, a Dairy herd, livery stables and pheasant rearing including the all important set aside conservation. It has a beautiful outlook over the Pennine Hills to the north and Welsh hills to the west with the family home set in an idyllic location for a country man.

Roger races in his local club and federation with the National Flying Club and MNFC as his main aims and races mainly cocks on widowhood with just a few pairs on natural. They are paired around the 20th of February and will go to the early races still rearing weather permitting. Around 20 yearling hens are placed in the youngbird loft with the babies and will stay with them all season, even when the loft is darkened for eight weeks beginning at the end of March. The cocks are exercised morning and night with the youngsters and yearling hens given an open hole for 6 hours during the day. Once the last old bird race has taken place with the National Flying Club from Sigogne, the widowhood cocks are not repaired to their original hens, instead all the partition doors are left open so they take a young hen or yearling in preparation for the channel races to come with the Nationals in September. One can imagine the late summer days with the birds chasing each other and clapping around the sky amplifying their motivation along with increased contentment within the loft.

The winning hen had paired to a retired racer and was sent sitting a six day old youngster with the Coutances race being the seventeenth race this season, and her fifth time over the channel. 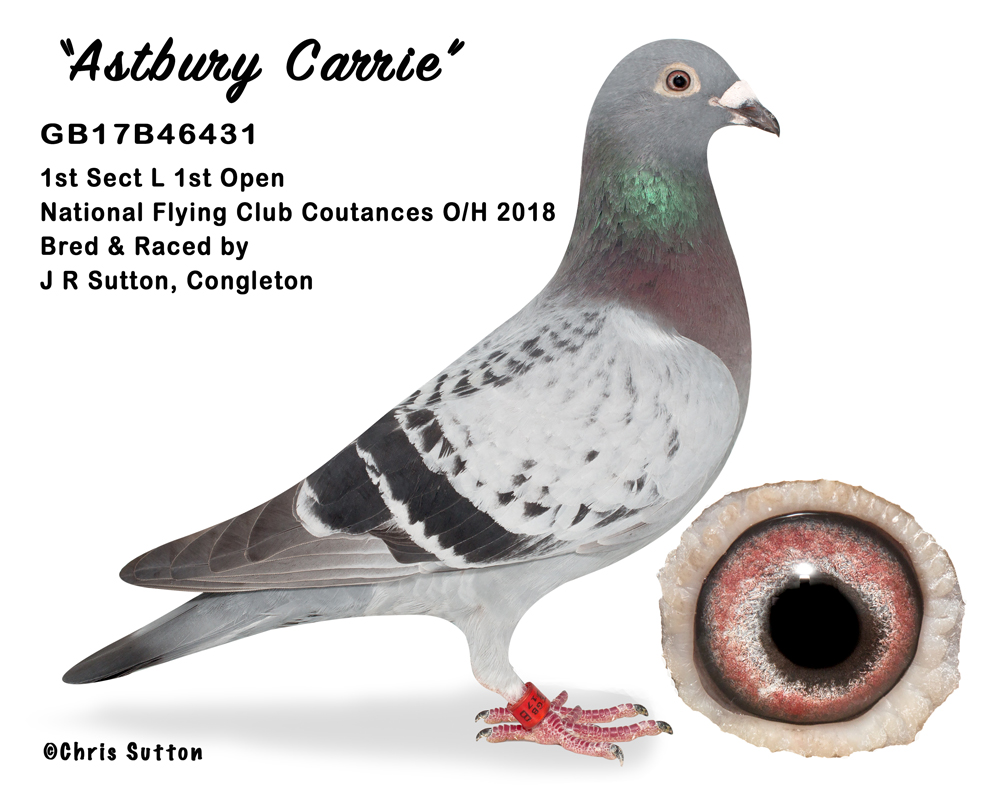 She is pure Hardy Kruger bloodlines, the sire and dam being both purchased from John Wheatcroft. The sire side has lines of Bailey with Sky Blue, and on the dams side are lines of Drogba with Orlando. He feeds his racers on Super Racing Bordeaux 50/50 with a mixture exclusive to Van Robaeys developed and used by Kurt and Raf Platteeuw who have had great success in the Belgian Nationals. It is like no other mixture on the UK market and Roger feeds all his youngsters on this. Bearing in mind that he also recorded the first three young birds in section L being 3rd 4th and 5th Open he must be happy with the result. The first two are young hens paired to old cocks and were sitting eggs. The third pigeon was a young cock who had claimed his own box after being given the run of the whole loft, so all had some major motivation. The first youngster was bred by R & B Smith after earlier exchanging six youngsters, and the other two were bred from his own National Winning Family.

He has had many successes over the years but when I asked him which was his most memorable he said that his timing from Bordeaux with the MNFC this season gave him the most satisfaction. Roger spotted his hen in the gathering darkness heading straight for home after flying 575 miles in just short of 14 ½ hours and this for him is the pinnacle of pigeon racing.

Interestingly, considering the bloodlines of the young bird race winner for David Lee, Roger also won section L from Sigogne this season with a cock called “Astbury Mint” which was also bred by Brian Murray of Sylvan Lofts. 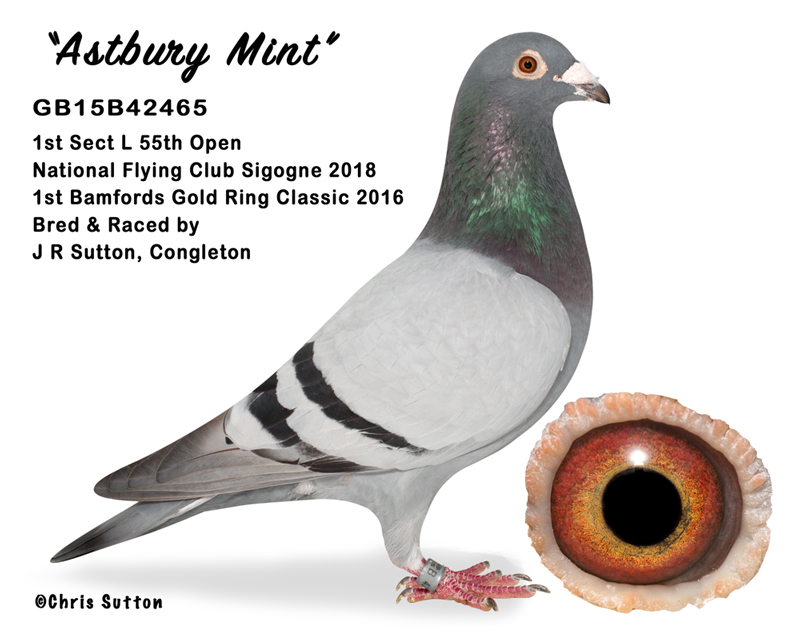 As a young bird he won the Bamfords Gold Ring Classic and this year he has flown 5 National Races, four with the NFC and Tours with the MNFC. He was 192nd Open NFC Coutances 6651 birds, 127th Open NFC Ancenis 5541 birds and 1st Section L 55th Open NFC Sigogne, so the Brian Murray bloodlines have been successful for both the winners of the NFC Coutances races. The sire of “Mint” is a son of Adonis and Double O of Leo Heremans the dam is a Syndicate Lofts pigeon from 'Dutch Master' and 'Drumlines'.